University of Maryland Global Campus's Office of the President leads the university in its mission of offering top-quality educational opportunities to adult students in Maryland, the nation, and the world, setting the global standard of excellence in adult education. 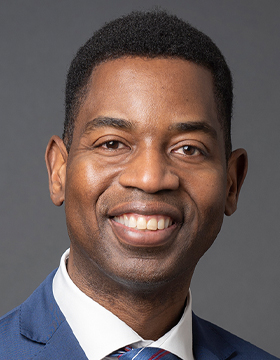 Gregory W. Fowler, PhD, became the seventh president of University of Maryland Global Campus on January 4, 2021. A nationally recognized scholar and leader in developing innovative learning models and experiences for adult and nontraditional populations, he has served on the leadership teams that built what are now the two largest universities in America—both of which serve nontraditional students in nontraditional ways.

Most recently, Fowler served as president of Southern New Hampshire University (SNHU) Global Campus and before that as SNHU's chief academic officer and vice president for academic affairs for its College of Online and Continuing Education. In almost nine years with the university, he led efforts to develop competency-based online and hybrid programs that respond to the rapidly changing demands of the workforce and global communities, including disadvantaged students in Los Angeles, refugees in Africa and the Middle East, and learners in Mexico and Columbia.

Earlier, Fowler held senior-level academic and administrative positions at Western Governors University (WGU), where he served as associate provost and dean of liberal arts and oversaw the development of new competency-based degree programs for WGU's colleges and—as director of Education Without Boundaries—launched a new student orientation program that exponentially increased student persistence. As the first director of Alumni and Career Services at WGU, he launched programs that drew high participation from graduates and garnered positive feedback from their employers.

Fowler was raised in Albany, Georgia, one of eight children in a family of modest means. He realized early on the power of education to change the trajectory of lives and impact communities. Working at the Six Flags Over Georgia theme park as a teenager taught him the importance of teamwork to organizational success and helped shape his management style.

After completing his undergraduate studies at Morehouse College—which included two years as a Charles A. Dana Scholar at Duke University—Fowler began his career at the National Endowment for the Humanities (NEH) in Washington, D.C., serving initially as an outreach specialist helping underserved populations access funds and resources to support their communities and amplify their voices. He later served as a media affairs specialist and received several NEH employee awards for developing workshops for historically black colleges and universities and developing and administering a new summer fellows program for outstanding college students.

While in the Washington, D.C., area, he earned a master's degree in English from George Mason University, then accepted a position as lecturer and, later, as assistant professor of literature and American studies at Penn State University–Erie while he pursued his doctorate in English/American studies from the State University of New York (SUNY) at Buffalo. As a faculty member, he was nominated three times for Penn State's Council of Fellows Teaching award.

While at Penn State, Fowler also received the first of two Fulbright awards to Germany and Belgium, where he would collaborate with students, faculty, and lawmakers on the future of the European Union and impact of the Bologna Accords. He also taught courses in international issues and international affairs at the John F. Kennedy Institute for North American Studies at Freie Universität–Berlin. Upon returning to the United States, he collaborated with the German Fulbright Commission and established a new teacher exchange program between Germany and Penn State.

Fowler served as commissioner and board member of the New England Commission of Higher Education (NECHE), which provides accreditation oversight for some of the nation's most highly regarded institutions. In that role, he co-chaired the team responsible for the future of post-pandemic remote learning experiences for colleges and universities.

He also served on the advisory board of the Pennsylvania Historical and Museum Commission and currently serves as a member of the Presidents Forum, the Board of Directors of the National Cryptologic Foundation, the Board of Trustees of the Consortium of Universities of the Washington Metropolitan Area, and the UPCEA Council for Chief Online Learning Officers.

Fowler has been profiled in the Washington Post and named to The Maryland Daily Record's Power 30 Higher Education list for 2021. He is coauthor of Anticipating and Managing Precipitous College Closures (New America, 2020), and contributed to Five Themes for Centering Student Equity, published in 2020 by the Sorenson Impact Center at the University of Utah. He has contributed numerous articles on innovation and evolution in higher education, including "Scaling an Undefined Landscape with Consumers As our Guide" in The Futures of Universities Thoughtbook (North American edition, 2020) and a series of articles in widely-read higher education publications such as The EvoLLLution. He has been a MAPS (Modeling, Analyzing, Prototyping, and Sharing) scholar with the Sorenson and Gates Foundations and an Aspen Institute scholar for the Postsecondary Success for Parents Initiative.

In addition to his undergraduate and graduate degrees from Morehouse College, George Mason University, and SUNY–Buffalo, Fowler holds an MBA from Western Governors University and has completed programs in higher education administration and executive leadership and negotiation from the Harvard University Graduate School of Education and Business School, respectively.

More from the President

Learn about the strategic roadmap for student achievement and growth.
UMGC Strategic Plan (2019–2022)